Here, we summarize the experimental results presented in the original paper. See that reference for more details.

The accuracy of the alignments is measured by the standard sum-of-pairs score (SPS). To measure the efficiency of the structural alignment, the consensus structures are predicted from the alignment results using the Pfold program.

The Matthews correlation coefficients (MCC) are then calculated for the predictions. MCC is defined by the formula

Comparison of the SPS and MCC values for several multiple alignment programs.

Comparison of time and memory usages 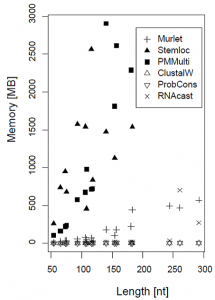 Elapsed time and the maximal resident memory for computing alignments of the datasets. In both figures, x-axis represents the mean length of the sequence families. Y-axes represent the maximal resident physical memory of the process in megabytes (MB) (left) and the elapsed time in minutes (right). Each data point represents a specific sequence family of Table 2. Only the alignments returned correctly are plotted. The memory and time consumptions of ClustalW, ProbCons, and RNAcast are very small when compared with those of the Sankoff-based programs, and several points for these programs coincide in the figure.